Natalia, you are a muralist, portrait and commission painter with a long resume in NY and LA, among the biggest and toughest art scenes in the country. How did you get started in this field and what is the key element with a direct impact on your work?

When I was a freshman at Oberlin, an artist named Josh Sarantitis came to speak to my art class about the history of murals specifically in the Bay Area and the work that he’d been doing since graduating Oberlin. It was one of those goosebumpy, animal brain moments where I just knew that I was seeing my future- I decided to move to the Bay Area after college because of Josh and work at the community mural arts center there called Precita Eyes. And that’s what I did! It took me a while to get up the nerve to go to Precita Eyes, but I finally did and I started as a docent there, giving walking tours of the murals in the Mission. I ended up volunteering on the restoration of a then 30 year old mural in Berkeley that had been given Historical Site Status with the two original artists, O’Brien Thiele and Osha Neumann. The project took about 8 months and it was incredible- I learned so much from those two! After that, I started my own company, Off The Wall, and started painting children’s rooms, schools and offices around the Bay Area. I guess you could say the key element that had a direct impact on my work was just starting to do it! I was an art major in college and I could talk a blue streak about concepts like cultural representation, societal constructs, the different contributions of various art theories etc., but I knew NOTHING about making a car look like a car, a tree look like a tree. Painting literally right next to the two masters, O’Brien and Osha was the greatest art school I’ll ever go to and definitely planted the bug that makes me want to paint large outdoor murals still today.

What is the magic of murals in enclosed spaces, private residencies, offices, etc? What are some of the best reactions you have experienced?

I really love painting children’s rooms because you have complete permission to create magic, to invent and reinvent reality. There can be butterflies in outer space, spaceships underwater, faeries dancing on the ceiling. I’ve found that a lot of these projects are a really fun way to tap into the parents’ imaginations- kind of creating the dream world that they wished they’d had as kids!

One mural I did had some three dimensional animals that I made out of papier-mache and I think one of the best compliments I ever got was that when the little girl who’s room it was came in for the first time, she walked right up to the 3D cheetah that was “sleeping” in a tree and pulled its tail! Of course it came right off which wasn’t the best part, but we all had a good laugh!

It is the community mural process that you find exciting. Can you share a fun moment to showcase the importance of community in your experiences as a muralist?

I was working on the restoration project of A People’s History of Telegraph Avenue, a huge outdoor mural in Berkeley. Working from old photos of the mural, we were essentially re-painting what was a really badly faded ghost image. I was painting a woman blowing bubbles into a psychedelic swirling sky. She’s shown from behind wearing a beret and a long dress with a braid swinging down her back. As I was painting, a woman came up behind me and started talking to me. Used to folks coming up to chat, I didn’t turn around right away and when I did, I saw a woman in a beret with a long braid.

“Hey, that’s me!” she said. And there she was- the photo I had been staring at for days, a character still as vibrant and fabulous as 30 years prior came alive before my eyes. It was a very surreal moment and one I”ll never forget- to be thanked by the woman I was painting- it was almost a time travel moment. But then again, Berkeley is kind of timeless (and time-warpy!) like that. 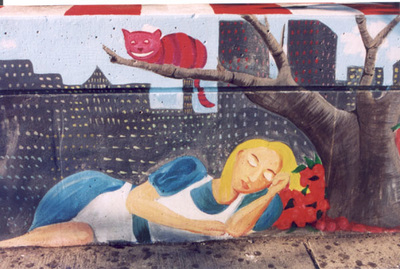 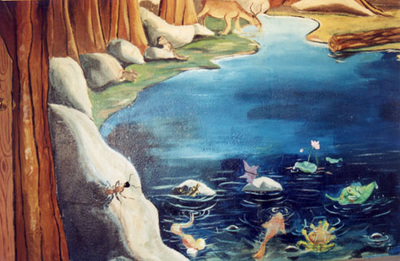 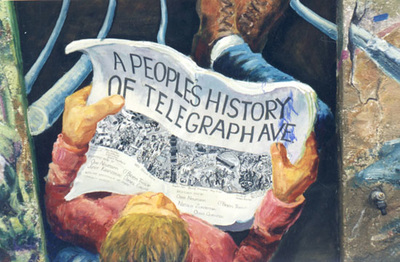 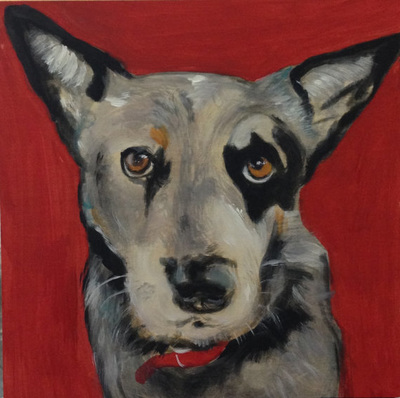 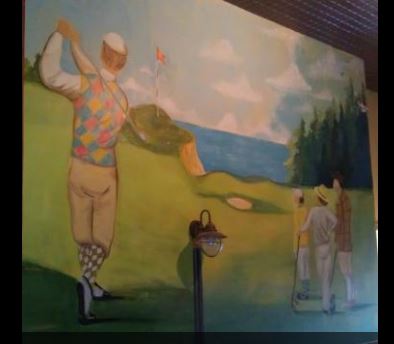 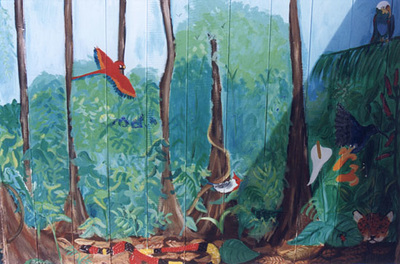 I don’t know that there’s a political statement that’s a turn off for me. I mean, I have my political beliefs and supremely left-leaning persuasions, but I love an argument. I also love being wrong so having to argue with someone who doesn’t believe what I believe and find ways to hear each other is a beautiful process.

I just worked on an installation with Josh at The Brooklyn New School. The kids made and painted over 300 ceramic leaves and we hung each one to create the feeling of wind and movement in the stairwell. Just to watch the reaction and happiness on the kids’ faces as they entered the school was a clear indication that art makes such a difference in people’s lives. The installation is in the entry to the school, a pretty drab environment otherwise. To come into school each day for the kids and caregivers and to know that someone cared, that the community contributed to the welcome feeling makes a huge difference in the desire to contribute to the school. I think every school should have something like it!

Who are the muralist and painters whose work you find captivating?

Through a really cool series of events this year, I got to meet and now work with Josh Sarantitis, whom I credit for making me want to paint murals in the first place. I am a huge fan of his work- his use of color, his storytelling, his inclusion of multiple techniques and all kinds of mediums and the passion and vision behind everything he does. I’ve been a fan for a long time and it’s an honor to work with him now.

I’ve also gotten to do a few projects with Kris Kollasch, a muralist out of Phoenix, AZ. Kris is pure joy and imagination and she creates fantastical worlds. I’ve learned so much from her and she continues to be a mentor for me.

I also really love Diego Rivera, Judith Baca, Susan Cervantes, Precita Eyes and the Mujeres Muralistas. Isaiah Zagar is the guy who makes all the mosaic mirror pieces in Philly and I adore those! And I also think the work that Groundswell does in Brooklyn is amazing.

In addition to being a visual artist, a muralist and portrait painter, you are also an awesome musician. Do you listen to music while involved in mural projects? Do you play with the visual aspect when playing and performing your music?

Yes! I try to have music on for all my projects and definitely listen when I’m in my studio painting portraits or commissions. Yesterday we listened to Miles Davis in the studio while we cleaned up from the last project, making room for the next. Cutting all the metal for the last piece, we listened to the Bach cello suites. Painting alone in my studio last week, I listened to Sufjan Stevens’s new record and my friend Ana Egge just sent me her new one and it’s been on repeat in my house ever since!

In terms of my own songs, I definitely write from a visual place- or try to, anyway. It’s more interesting to show than to tell in songwriting I think.

For music and visual power, what places never fail to amaze you?

The ocean, the mountains, a patch of grass in the park. Pretty much anywhere in nature. I also love the concrete canyons of New York, the cobblestone winding streets of downtown Brooklyn and Soho, but I’m finding more and more that I crave, that I need silence and space to hear my own heart.

What’s your mantra in life and art?

Hmmm… I don’t know that I have one. I do know that I’ve been truly blessed and super lucky that I’ve gotten to create art and music for a living and that every day is a day where I make something. When I get down about stuff, which of course I do, I really try to remember that place and find the gratitude. It helps. A lot.

For commissions and murals, what is the best way to reach you?