​Matter Out of Place

How awesome that we have the opportunity to share your talent and some of your thoughts with our HocTok community! Thank you!

Tell us a bit more about Orbiter 3, Philadelphia’s first playwright producing collective, in which you are a founding member. How did the idea behind it become reality?

Three of the original members, Emily Acker, Emma Goidel and Douglas Williams were all members of the Foundry and I served as a mentor for the organization. Emily, Emma and Doug hatched the idea with Maura Krause our Artistic Director and reached out to myself and Mary Tuomanen to round out the collective and about halfway through our life we added two more playwrights: L. Feldman and Sam Henderson.

We looked to 13P (Thirteen Playwrights) for inspiration and gave the model a uniquely Philly spin by offering memberships so that we had a built-in audience that felt invested in the collective. We committed to fare pay for local artist teams and cast. We wanted to engage with local communities that each individual play spoke to. Our hope was to spotlight our own work on our own terms and in turn, we would encourage more productions of plays written in Philadelphia by writers local to the scene. We’ve definitely seen an increase, one theater in particular, Azuka Theatre Company run by Kevin Glaccum, has selected an entire season of local plays one of which is Emma Goidel’s The Gap.

What does it mean for you as a playwright, performer, director to be a recipient of a number of prestigious awards and prizes? How do the accolades and praise translate in the day to day reality of a creative life?

It’s surreal some days. Some days it feels really good and other days it feels so incredibly strange. But I’ve been writing plays in some form or fashion since I was a preteen so I’m happy that people appreciate what I’m writing.

On a day to day basis I try to focus on what I need to say. The prizes and awards have offered me a larger platform so I feel the responsibility to be really clear about how I’m saying things and what I’m saying. The attention has made me sharper and made me lest reticent to simply speak truth in the best way I know how. They have become kindling in a way.

​Who are the characters and what are the moments you understand most and do your best to present in your writing and performing projects?

I’m also really preoccupied as a writer how the present rhymes with history. I think it’s Mark Twain that says history doesn’t repeat it rhymes. When I’m writing about a historical moment or person, I’m examining how that moment or person is rhyming with the present.

So, when I approach Martha Washington, I’m not trying to document her, I’m trying to tease out how she is still here, how her complacency and blindness about injustice is still apart of us. Big ideas right. But then I consider…how do you make the big ideas, the big moments, the big people feel intimate and for lack of a better word, natural. In my play WHITE I depict the visual art work and it’s commodification of black bodies and black genius. But I’m also examining collaboration and how people work together and I’m also examining interracial love and partnerships at the same time. With a lot of humor.

​Why is it important for people to tune out of all other kinds of noises in order to pay more attention to what you and your fellow playwrights, actors, and directors are doing on stages in Philadelphia and other cities around the country?

I don’t want people to tune out. In fact, structurally I’m trying to make people uncomfortable in the theater when they see my plays. I feel like I’ve succeeded if my play rearranges and undermines the audience’s expectations. That’s one of the novelties of the theatre. Anything can happen, there is danger inherent in going to see a play. I mean…the set could fall, the light board could die and cast the play into darkness and we are all in that room together experiencing that. That’s dope. I never get tired of that feeling of anticipation I feel when I sit down in a theatre seat. I recently saw a play where an actor forgot their line. It was electric. The reason to see a play or anything live for that matter is the fact that a community is built instantly. I think plays are gestures towards creating an ever-expanding community and it happens in real time. If you’re not in the house, you don’t get to experience it. You can’t get it on demand, you can’t go to hulu. And I’m not anti-TV or technology, I just feel what we do in the theatre can’t be replicated in other mediums. And I think we need that now. 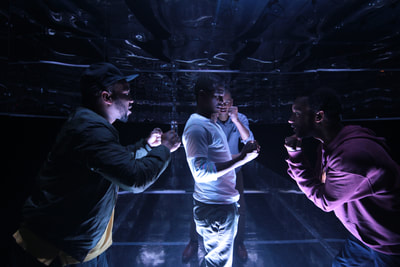 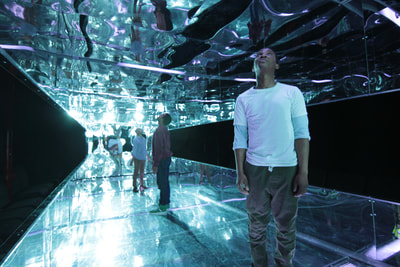 Looking at your plays, specifically at Matter Out of Place, it’s easy to grasp many interesting concepts such as ,“twitter feed as the holy scripture”. What made you develop that line of thought which sounds pretty freaking genius and scary at the same time?

I realized that so much of the creative genius in our culture right now is happening on social media. I’m amazed at the creativity that people use to speak in 140 characters, through short moving pictures, through status updates. Right now, and I couldn’t have fathomed presidential policy via twitter when I wrote that play, I think we are seeing the power of these platforms and how much good/bad they can do, instantly. At the time, I thought it was cute. “Oh look…this kinda goofy dude is changing the future with twitter.” Now I’m like “well dang…who knew!”

In your play, history of walking, you invite people to consider how we can discover the humanity of people we don’t agree with… Much easier said than done, as you surely know. What’s your advice as an artistic soul to achieve such a righteous state of mind?

In the play characters discover the humanity of people they don’t agree with through cataclysmic forces. A second coming, rising sea levels, multiple bombing, multiple murders. In the real world, I think these are metaphors for how real change happens. Confronting the “no good ancestors” at the gate ready to burn it all down to prevent change. It takes dismantling institution (both actually and imagined) that are holding us back.

People in the theater are good at looking at people who are not like us and finding their humanity. You can’t play Macbeth, Richard the III or Roy Cohen without extending your empathy to someone else. Which is key.

Taking flight from your play, White, how have the issues of race, gender, sexuality and art evolved before your eyes in recent years?

It’s still pretty bad I think. There are organizations working to transform theater. The Kilroy List every year has highlighted under-produced plays by women, trans and non-gender conforming playwrights and I have seen many of those plays get produced as a result. I’ve seen an increase in women running theaters though not nearly enough. Theaters are still largely white and largely male organisms. I feel that theatre audiences are getting older but also younger people are beginning to come to the theatre. I feel theatre is still too expensive which makes it super elitist but I also see theatre in my city beginning to subsidize tickets so that they can be more affordable.

My hope is that it continues to be more and more inclusive.

What is your idea of beauty in the context of a place, a reality, life? Where do you seek it and find it in its most natural form?

I’m really afraid of water but I’m also drawn to water. It shows up in my plays a lot. I love beaches and lakes. Water is beautiful to me because it’s soooo transformative. It can go anywhere, but it always remains itself. I think that’s how I try to live my life, be malleable, be moveable, but always be James. I find beauty in people. How we are drawn together. I like watching people on the train or in a book store or at a concert.

I love how astonishingly different we are from one another and yet completely connected whether we like it or not. I grew up in a Baptist church in the south. When the entire church would be singing or shouting or praying or crying, you couldn’t help but see the beauty in that. It informs every square inch of my life and work.

What story has made you happy and given you hope in recent days?

I don’t know if this counts but…I just recently watched like nine seasons of RuPaul’s Drag Race and I have to tell you that has been a refuge. It isn’t really a story, but watching them all grow and get better and go home stronger and create beautiful illusions has been so rewarding and therapeutic. I’m really inspired by them.

Why is Philadelphia a great city for the arts? What makes it special to you?

Philly is dope. I went to grad school at Temple University in North Philadelphia and stayed because the theatre that’s being made in Philly is daring, stylistically diverse and really fresh. It’s a city where you can be whatever kind of artist you choose and people support you. I started as an actor, now I write, I direct, I teach. It’s a place that is very good at drawing out the best in its artist. I just love it.
Follow @hoctok