​             Manchester, England. I leave behind picturesque Italian cities for you, oh, Manchester. Not the same landscape, but by no means less fun and exciting days ahead. I am in the company of my friend and colleague, Tom Newall (www.tomnewall.com). One of the objectives is getting to know Tom’s orchestra, the Piccadilly Symphony (www.piccadillysymphony.co.uk). How do we do that? Well, it takes many late nights with the musicians as well as the incomparable, Rachel Cotton, the orchestra manager. Tom and I are both the sort of conductors who love sharing ideas. Naturally, we end up spending countless hours talking shop as we explore Manchester's food and bar offerings.

As musical theater buffs, we cannot pass up the opportunity to see the West End tour of Wicked, which was playing in town. I have known some of the music from the show for a while, but I had never seen it before. This is a treat! I was very impressed by the quality of the performing and the production and really fell in love with the show. There was a lot more depth and complexity than I expected and it really did change my way of thinking about the classic Wizard of Oz tale. I was particularly fascinated by the strand of the plot surrounding the plight of the animals who were being rounded up, experimented on, silenced, and put in cages. It struck me as an obvious allegory for the Nazis, especially given the costume design of the men who were doing all the locking up. Of course, I didn't come to England just to be a musical theater critic. I came to get to know how music gets made and see what lessons I can take home with me.

Music making in the U.K. is so fundamentally different than it is in the U.S. that it's actually a bit hard to describe. It all starts with universal, fairly comprehensive music education in schools. Of course, the quality of instruction varies. But it seems that almost all adults had some meaningful experience with making music as kids. Even if they don't continue doing music as adults, most people have a basic understanding of what making music is all about. They know of the kind of contribution a musical institution makes to a community. That means that the strong network of community choirs, church, choirs, community bands, community theater (including musical theater and operetta), and community orchestras is consistently replenished and supported. With a base like that, the sky's the limit.

The orchestra that Tom founded about 18 months ago is a perfect example of the world of mid-level professional music making that is fairly common around the U.K.. Sadly, almost non-existent in the U.S.  The Piccadilly Symphony focuses on bridging the gap between professional training and full-time professional playing. It's something like the Chicago Civic Orchestra. Many of its players do earn a living freelancing. And the opportunities for freelancing are shockingly plentiful. The orchestra itself has been able to start paying their players union rates and has done some really big gigs. How does a new orchestra get established so fast? Obviously Tom and Rachel, the orchestra manager, have done amazing work. But, there's also a real infrastructure for them to fit into. For example, public libraries often have extensive collections of scores and sets of parts for both band and orchestra. They are free to borrow for study purposes, even if you're not local, and you can rent a set for performance for a nominal fee. In the U.S, you would need to be affiliated with a university music school, conservatory, or professional orchestra to have that kind of access. Choirs and churches around the Manchester area often hire the P.S.O. for performances of big choral-orchestral works and Tom and Rachel able to find funding from public and private sources for their own stand alone concerts. Of course, the P.S.O. are also hired to do a lot of education programming. The gig I was involved with is a perfect example of this last category and how it can successfully be at the heart of the life of an orchestra in England.

Bridgewater Hall. A 2,000 seat venue in the middle of Manchester has become the premiere venue of the city. This year, they decided to host an open day, inviting the public to spend the day at workshops, short concerts, and musical events. Piccadilly Symphony was hired to provide all of those events. We started the day on the main stage with a gang of children and adults at all levels of proficiency on their instrument joining the symphony. We worked through two pieces from the BBC's Ten Pieces program. This is a package of educational resources that includes arrangements of famous orchestral works built to be played by groups from absolute beginner up through professional and any mix thereof.  Can you imagine the excitement? We rehearsed the arrangement of the first movement of Beethoven's Fifth Symphony, conducted by Tom. Then Yours Truly conducted the arrangement of the finale of Stravinsky's Firebird Suite. It was really remarkable how well it all came together in our mini performance. Everyone had a lot of fun digging into some great masterpieces at their own level.

The Hallé Orchestra taking the stage. 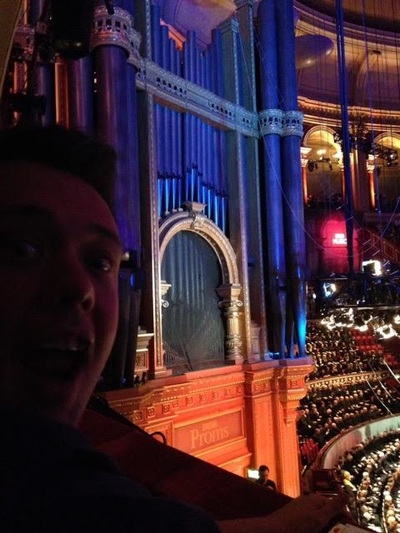 Inside the Royal Albert Hall. That’s one big organ. 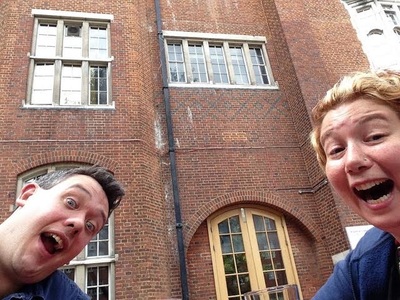 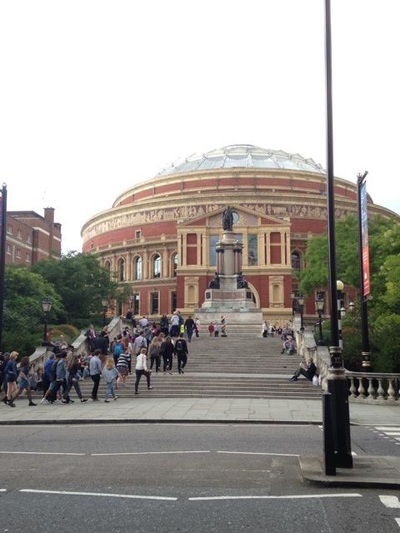 Royal Albert Hall. BBC Proms, here we come!
Following a short break, the orchestra reconvened for a lunchtime concert in the foyer. It was originally envisioned as background music as visitors ate lunch, but we ended up drawing a standing room only crowd. Tom and I shared the conducting duties for a mix of arrangements of film music and movements of famous classical music. The crowd had a great time singing along. All really appreciated the opportunity to see an orchestra up close, in an informal setting. For the rest of the day, individual performers and small chamber groups led workshops that let kids try out instruments, included short performances, and a host of other activities. It was a great chance for the community to get to know the orchestra. Simply a wonderful time! We inspired a new generation of music lovers. Probably clicked the right boxes with new orchestra supporters. Just as important, we forged a relationship with an important venue in town.

Tom, Rachel, and a small band of colleagues had put months of work into making this gig happen. So, of course, a celebration of its success was in order. A small gang headed to Fumo, a new Italian restaurant right near Bridgewater Hall. The locals call it Italian tapas, since they serve mostly small plates of things. It seemed to me like a very elaborate apperetivo bar. The food and cocktails wee just as good as what I had had in Italy, in other words, really excellent. I have to admit, a good break from all of the meat pies I had been eating. Celebrating and chatting with the waiters in Italian was bizarrely comforting. I keep saying I don't really speak Italian, do I? Well, in any case, visit Fumo, highly recommended if you find yourself in Manchester.

Tom and I capped off my visit with a slightly crazy trip down to London to see a concert at the BBC Proms. Obviously, an early train was not really a good idea. In London by 3pm, wandering in Soho for a bit, and then dinner at the college bar across the street from the Royal Albert Hall. It’s where all the performers tend to hang out.  Of course, between there and the concert we ran into a lot of people that Tom knows. What a crowd! Real fun to say hello to all kinds of musicians and music lovers. We saw Sir Mark Elder with the Hallé Orchestra perform Debussy, Vaughan Williams, and Elgar. The performance was superb. I turned off my analysis mode for most of it. Our seats gave Tom and I the chance to see the show from a player's perspective.  It meant we were able to watch the conductor the whole time. Sir Mark has a really special relationship with his orchestra, easily manifested in the freedom of his conducting. He trusts the players. They trust him. It’s all about conducting the music within the notes, rather than the notes themselves. It was like seeing in action the ecstatic ideal that most conductors strive for. The concert was absolutely worth getting back to Manchester at 2am only to be at the airport by 9am.
Home sweet home, yes, but I was sad to leave. It was so nice reconnecting with a true friend, Tom, conducting the Piccadilly Symphony, and exploring Manchester in detail. In fact, let me confess my love to Manchester as a cool destination. It's not an obvious tourist retreat. Nevertheless, it's a great city filled with good restaurants, exciting nightlife, museums, great shopping. Most importantly, visit Manchester for the live music reaching high and above as far as the eye can see. A city within striking distance of Yorkshire and all of northern England while still being only a two-hour train ride from London. If you've done London thru and thru, and still want to get to know England better, go north lads and lasses. Go North, to Manchester!


Check it out the trip to Italy...