Under The Udala Trees 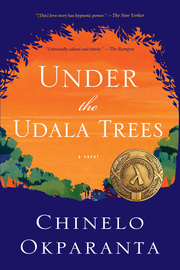 Chapter 57
I acknowledge to myself that sometimes I am a snail. I move myself by gliding. I contract my muscles and produce a slime of tears. Sometimes you see the tears, and sometimes you don’t. It is my tears that allow me to glide. I glide slowly, but, slowly, I glide. It is a while before I am gone.

That first night of our marriage, I was a snail. We were all of us once snails.

In the beginning, we had stayed with Mama in Aba, and we had slept in my room, just for that first month of marriage, that one-month space just before Chibundu got the Port Harcourt job. Mama had found a second twin bed and mattress, and pushed them together so that they appeared to be a double bed. She had spread new sheets that she had purchased as our wedding gift.

That first night, Chibundu called me to him. He was wearing remnants of his tuxedo—the tie, the white shirt, the trousers. He sat on the edge of the mattress.

I went to him, sat by his side. No alarm yet.

“You’ve made me a very happy man,” he said, leaning over, wrapping his arm around me.

He leaned in further, began kissing me; I allowed him to do so.

“There is no more complete happiness than the one I’m feeling now,” he said between kisses. “Look at me. I feel like I can fly.”

Instead I said, “We should try and get some sleep.”

He laughed. Not disrespectfully. Almost appreciatively, for the sexual banter he perceived was going on. “Nawa o!” he said. “Women and their teasing! But of course, Ijeoma, you do know that sleep is the very last thing on my mind!” He made a sudden movement with his hands, and I watched as he began tugging at the front of his trousers. Then came that dreaded sound: just the sound of a man undoing his zipper, but it was as if a sharp object had somehow made a jab at my ears.

A roomful of alarm. Alarm like fog, clouding up the atmosphere.

I pulled away so that there was at least a forearm’s length of space between us. I folded my hands across my chest, looked up at the ceiling, not wanting to look at him. Uniform tiles formed large squares above, gray, like the paint on the walls.

Some time passed. A few more minutes. I lowered my folded arms from my chest, took his hand in mine.

Sometimes a story reminds you of a painting. Each time I tell this story I see that old painting of a beach. Azure blue skies melting into a lighter shade of blue, melting into the pastel yellow of the disappearing sun, melting back into a sea-colored blue. A glass-looking slab of wood near the edge of the earth, where brown and sea-blue meet. There is a mountain range, craggy rocks, peeking in from the right side of the painting, and in the foreground, there is the darkness of the cacao-colored earth.

The painting would be almost unremarkable if not for the rest of the objects in it: a plain-looking brown box, like a trunk. From the trunk, a growth, like a cancer, a stump of a tree, branches and all, but no leaves. And then a scattering of melting clocks, like wilted rags: one hanging from a branch of the stump, one hanging droopily from the trunk box, another hanging from an abstract-looking figure, a cross between a duck and a human face. Finally, a burnt-orange clock covered in tiny black ants.

There, I was, holding Chibundu’s hand, and as I held it, the words came to me: “Too much ceremony has a way of taking the life, of taking the joy, out of what is being celebrated.”

The next thing I know Chibundu was looking at me with a look of shock on his face. I put down his hand and returned my hands to my sides. His eyes were steady on me, careful eyes, as if he were looking at something strange, new, unexpected version of me. And, of course, to him, he was.

I left him where he sat and walked over to the window. I stayed by the window, still in my wedding gown. Every once in a while a breeze blew in through the open space. In the few instances that the breeze was strong, I pushed my face into it, as if it would somehow blow away my agony.

Even when I heard Chibundu’s soft snoring, I continued to stand by the window, wide awake. The sky turned from black to gray. In the distance, the crowing of the roosters and hens. Only then did sleep come to me.

I struggled to undo the zipper of my wedding gown, stepped out of it.

The knock came just as I had put on my nightgown. I opened to Mama, standing with her wrapper tied across her chest, wearing a bright smile.

“Come, come,” she said, waving me toward her and out of the room. “Come.

“Nwanka!” she said, feigning exasperation. This child! But there was a hint of a smile on her face. “How was what, Mama?” she repeated, mimicking me. “Of course you know what I’m asking! How was your first night as a wife?”

I shook my head, embarrassed that she should even ask. “Mama, I’ve barely slept.”

“Of course not!” Her smile widened. “It’s no surprise that you’ve hardly slept. All that happiness!”

Still, there she was, pulling me by the hand in the name of happiness. Out of the room, down the corridor, and into the kitchen. The wedding ceremony food had been cleared off the counter. All that remained were the empty plates and trays and baskets and bowls.

She pulled out a stool for me. With a slight nod of her head, she signaled me to sit. She cleared her throat, a placid, almost vacant look on her face. She said, “So, you two have already begun, haven’t you?”

“You know.” A pause. “It’s never too early to start working on a child.”

Her eyes focused now, her eyes no longer vacant. “Well, it’s nothing to be embarrassed about,” she said, looking straight into my eyes. “There’s nothing more meaningful in a marriage than having a precious child of your own.”

​
​                Our second night, Chibundu came again to me, wrapped his arm around me where we sat on the edge of the bed. There was more determination in his gestures, and in his eyes was the raging look of a man who was expecting what was denied him the night before.

I shifted away instinctively. His eyes turned soft, pleading, just as soon as I moved. He stroked my shoulders. “It’s not by force,” he said in a whisper. “It’s not something we should do by force. Let me know when you feel ready.”

That night, I saw the foolishness of my resistance in his words. Let me know when you feel ready. I knew in my mind that I might never feel ready. There was no sense prolonging my resistance. Anyway, better to have one miserable person than two.

That night he moved closer to me, unzipped his pants. That night, I allowed him to make love to me.

"Under the Udala Trees"